Will Childhood Vaccinations in Schools Mean the End of Parental Consent? 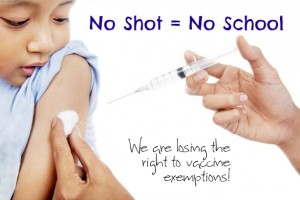 In the United States during the past two years more than 30 school districts have set up vaccination clinics where children were given the flu vaccine. One manufacturer even supplied free vaccines.

However, according to the CDC, because these trial clinics were conducted with donated vaccine, they have not addressed any problems that the schools may have when dealing with other organisations and businesses.

Denver school children to be vaccinated at school.

Therefore the Centers for Disease Control and Prevention has decided to fund a trial, at a cost of 1.6 million dollars, whereby two cities, one of which is Denver Colorado, are to set up vaccination centers in their public schools.

When vaccinating insured students the schools will deal directly with the insurance companies so that parents will not be billed. In the case of Denver about 4000 children will be taking part in the experiment.

Adolescents not fully up to date with their vaccines.

Another reason for this trial is to attempt to get more adolescent children vaccinated. Since 2005 new vaccines have been licensed and recommended for the adolescent population. These include:

It has been estimated that up to sixty percent of adolescents are not fully vaccinated.

All school children to get their vaccinations at school.

The long term goal of this trial is to determine if it is feasible and sustainable to vaccinate all the children in the schools regardless of their insurance status.

Lead investigator of the Denver In-School Vaccination Project, Dr. Judith Shlay, of Denver Health, readily admits that if all goes to plan then these school based vacination clinics will be implemented throughout the US.

The winners of this trial, if successful, will be the vaccine manufacturers who will have a guaranteed target market to whom they will supply increasing numbers of vaccines paid for by the taxpayer. Insurance companies will also be happy as they will have a good reason to raise their premiums. The total cost per vaccinated adolescent in the private sector is over 500 dollars.

The losers will be the parents and their children. Dr. Matthew Daley considers that having to obtain parental consent in order to vaccinate children is an inconvenience for these school clinics. The right of parents to refuse vaccines, which is protected by most state laws, is considered unhelpful to the pharmaceutical companies.

Another bill in New York would make the controversial HPV vaccine (Gardasil) compulsory for attending school.

The children will also be losers because ever increasing numbers of them are having bad reactions to vaccines. For example. In the US the number of adverse reactions to the HPV vaccine Gardasil as of August 2009 were 12,424, of these 772 were serious and included 32 reported deaths.

There are two reasons why so many children are having adverse reactions to vaccines.

Vaccines contain toxins, the following are some of the worst poisons there are more:

* phenoxyethanol (used to make antifreeze),
* Aluminum hydroxide (a study using mice discovered that it destroys brain cells),
* Formaldehyde (embalming fluid, the stuff that’s injected into dead people),
* hydrolized gelatin (linked to brain damage),
* thimerosal (comprised of 49 percent mercury, which is highly toxic and known to cause brain damage),
* Polysorbate 80 (can cause infertility, also, can cause spontaneous abortions if given to pregnant women),
* Aborted foetus tissue (can sometimes be diseased and, of course, the vaccine recipient is being injected with foreign human DNA),
* Plus the brains and internal organs of a variety of animals: cows, dogs, mice, monkeys, etc. Which have been known to be contaminated with unwanted and harmful viruses.

The second reason is that children are simply been over vaccinated.

Starting before birth to age six, children born today in the United States are given 49 doses in total of 14 vaccines as follows:

After been injected with the above it is no surprise that the Centers for Disease Control and Prevention state that one child in six in the US is developmentally delayed.

Parents must keep their human right to refuse vaccinations for their children.

With the ever increasing numbers of children suffering long term illness after been vaccinated it is more important than ever that parents retain the right to refuse vaccinations.

This means that parents everywhere must campaign to safeguard state exemption laws that uphold parents’ freedom to choose whether or not to vaccinate their children.

Throughout the United States full body scanners are being installed at airports. Are these scanners safe for passengers.

The A to Z of Alternative Medicine.